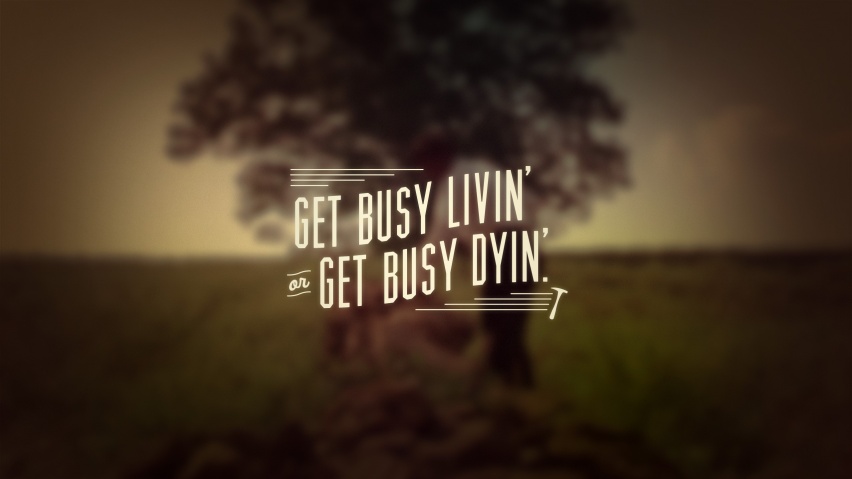 Movies give us tons of life lessons and sometimes inspire us to do something out of the ordinary, to push yourself. Here're some popular quotes from Hollywood movies that will keep you motivated and get you moving through the day.

—Chris Gardner, The Pursuit of Happyness

"Some birds aren't meant to be caged. Their feathers are just too bright."

"Get busy living or get busy dying"

"It is not our abilities that show what we truly are. It is our choices."

—Dumbledore, Harry Potter and the Chamber of Secrets

Frodo: "What are we holding onto, Sam?"

Sam: "That there’s some good in this world, Mr. Frodo, and it’s worth fighting for."

—Frodo and Sam, The Lord of the Rings: The Two Towers

"Strange, isn’t it? Each man’s life touches so many other lives. When he isn’t around he leaves an awful hole, doesn’t he?"

"In this life time, you don’t have to prove nothing to nobody, except yourself. And after what you’ve gone through,if you haven’t done that by now, it ain’t gonna never happen."

"Ah yes, the past can hurt. But the way I see it, you can either run from it, or, learn from it."

—Yoda, The Empire Strikes Back

"Happiness can be found even in the darkest of times. If one only remembers to turn on the light."

—Albus Dumbledore, Harry Potter and the Prisoner of Azkaban

"A laugh can be a very powerful thing. Why, sometimes in life, it's the only weapon we have."

"It's only a passing thing, this shadow. Even darkness must pass. A new day will come. And when the sun shines it will shine out the clearer."

—Samwise Gamgee, The Lord of the Rings: The Two Towers

"I know, it's almost impossible to succeed, but who cares, really? The answer must be in the attempt."

"Our lives are defined by opportunities. Even the ones we miss."

"Great men are not born great, they grow great."

"No matter what anybody tells you, words and ideas can change the world."

"You mustn’t be afraid to dream a little bigger, darling."

"Sometimes it is the people who no one imagines anything of who do the things that no one can imagine."

"There should be no boundaries to human endeavor. We are all different. However bad life may seem, there is always something you can do, and succeed at. While there’s life, there is hope."

—Stephen Hawking, The Theory of Everything

"The only thing standing between you and your goal is the bullshit story you keep telling yourself as to why you can’t achieve it."

"We buy things we don’t need, to impress people we don’t like."

"Ernest Hemingway once wrote, ‘The world is a fine place and worth fighting for.’ I agree with the second part."

"To see the world, things dangerous to come to, to see behind walls, to draw closer, to find each other and to feel. That is the purpose of life."

"We all end up dead, it’s just a question of how and why."

"Remember Red, hope is a good thing, maybe the best of things, and no good thing ever dies."

"My Mama always said, ‘Life was like a box of chocolates; you never know what you’re gonna get.'"

"You don't have to be the bad guy. You are the most talented, most interesting, and most extraordinary person in the universe. And you are capable of amazing things. Because you are the Special. And so am I. And so is everyone. The prophecy is made up, but it's also true. It's about all of us. Right now, it's about you. And you... still... can change everything."

Bruce Wayne: "I wanted to save Gotham. I failed."

Alfred Pennyworth: "Why do we fall sir? So that we can learn to pick ourselves up."