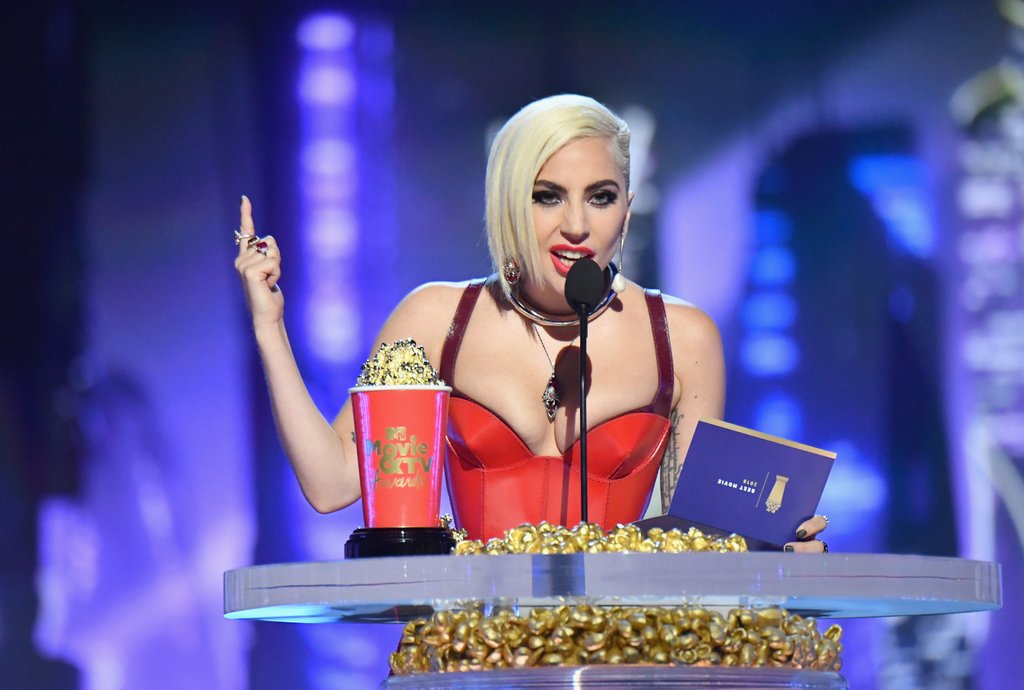 Lady Gaga surprised fans when she took to the stage to give the award for Best Movie, which she ended up awarding to "Black Muthaf*ckin' Panther."

"It's not just for people of color, it's universal" -@michaelb4jordan

Congrats to #BlackPanther for taking home the #MTVAward for Best Movie pic.twitter.com/rOJM6I79KD

Eleven (or Millie Bobby Brown) from  Stranger Things 2  won for best performance in a show and speak out against online bullying, days after deleting her Twitter account for the exact same reason.

She said, “I want you to know how grateful I am to those that support me. Since I know there are many young people watching this, and even to the adults too, they could probably use the reminder that I was taught — that if you don’t have anything nice to say, then don’t say it.”

“Landing the role of Eleven in @Stranger_Things has changed my life.” Congratulations to Millie Bobby Brown for winning Best Performance in a Show ??| Tune into the #MTVAwards right now on @MTV! pic.twitter.com/dRODnOPKDz

Michael B. Jordan won the award for best villain for his role in Black Panther and also made a witty remark towards Roseanne Barr at MTV Movie & TV Awards.  Roseanne Barr has received widespread criticism since she directed a racist tweet at former Obama administration aide Valerie Jarrett, who she called the offspring of “Planet of the Apes” and the Muslim Brotherhood.

“I’m shocked that I won this award for best villain,” Jordan said. “I thought for sure Roseanne had that in the bag.”

4. Chadwick Boseman shares his award with a real life hero

Chadwick Boseman won the award for best hero for his role in Black Panther, but he chose to share it with a real-life superhero, James Shaw, the 29-year-old who fought off a gunman in a Tennessee Waffle House earlier this year.

Boseman said,  “Receiving an award for playing a superhero is amazing. But it’s even greater to acknowledge the heroes that we have in real life. So I just want to acknowledge somebody that’s here today: James Shaw Jr.” Later after giving the award to Shaw he said, “If you don’t know James Shaw Jr., he fought off a gunman in Antioch, Tennessee, at a Waffle House, He saved lives.”

He also won the award for best performance in a movie later that night.

“Being part of Stranger Things is one of the most incredible experiences and we can’t wait to take this back and share it with the rest of our team,” said Sadie Sink, who plays Max.

“We want to thank the amazing cast and crew that we work with every day,” said Wolfhard, who plays MIke. “They’re so fantastic and they make our jobs so much easier.”

Matarazzo, who plays Dustin, also said, “We really got to thank the fans because if we didn’t have people watching the show we probably, well definitely wouldn’t be standing up here right now. So thank you to everybody that watches the show and supports us. It means so much.”

We all deserve friends like the @Stranger_Things crew. Congrats on Best Show! #MTVAwardspic.twitter.com/vuP30ggDEl