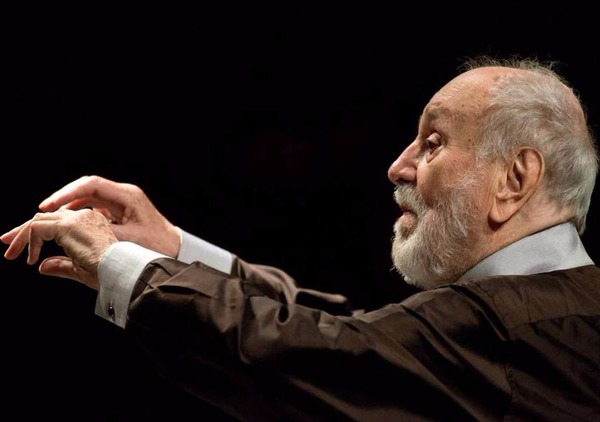 German conductor and humanitarian Kurt Masur has been honoured in a Google Doodle on what would have been his 91st birthday.

Not just an inspiration in the world of music, Mr Masur was also an influential figure in the political scene of East Germany. Born in Brieg, Prussia (now Poland), he trained on piano, cello, organ and percussion.

As a youth he was forced to play in Volkssturm, an army band established by the Nazis in late 1944, btut an inoperable injury to his hand at the age of 16 meant he had permanent tendon problems.

The injury forced him to move away from playing instruments and into conducting, and was also why he never used a baton. From the Kimsche Oper to Dresden Philharmonic, he led numerous orchestras and opera companies throughout the newly formed post-war East Germany.

Most notably in his time in Europe, Mr Masur became leader of the Leipzig Gewandhaus in 1970, one of the continent's most prestigious orchestras, and held the position for 26 years. Such was his influence from powerful conducting and musicianship, he convinced East German Chancellor Eric Honecker to rebuild the Gewandhaus' concert hall.

His force of will also allowed him to overcome the challenges of the era and take the orchestra on international tours. But it was in 1989 that arguably his greatest moment would come. Political upheaval was in the air as the Soviet Union collapsed, and as thousands of Leipzig residents took to the streets to protest, Mr Masur would take on a stunning public role.

On 9 October he invited the masses into his orchestra's concert hall and held what was likely the first public debate East Germany had known. His cultural status had afforded Mr Masur a measure of soft power, but this was different. This was quite a moment for a man who had never been a member of East Germany's ruling Communist party.

“No one knew what would happen, and I had only some minutes to decide .... But I also knew that if I didn't do something I would regret it for the rest of my life,” he told The Independent in 1994.

“I got a message from the church - a boy came to me: 'Mr Masur, you know there is a police order to beat this demonstration down.' And this was a clear message: they would shoot. I phoned my wife and said, I think I have to intervene. She said OK. So I opened the doors. The police didn't come in.”

​When a chance to conduct for the New York Philharmonic (NYP) came up, Mr Masur seized it. He remained as music director from 1991 to 2002, while holding the Gewandhaus job simultaneously until 1996. While he was not the most charismatic or flamboyant person at the podium, Mr Masur become known for improving an orchestra that had gained a reputation for not being able to hit its previous heights.

Leaving the NYP in 2002 was not his decision, Mr Masur later said, but he became the orchestra's first music director emeritus. He would also work as the principal conductor for the London Philharmonic from 2000 to 2007 and as the music director for the National Orchestra of France from 2002 to 2008. He was also honorary guest conductor of the Israel Philharmonic Orchestra.

In 2012, Mr Masur announced he had Parkinson's disease, which he had been suffering from for many years. That year he was sent to hospital after falling off the podium during a concert in Paris. He died from complications from the disease at the age of 88 in Greenwich, Connecticut.