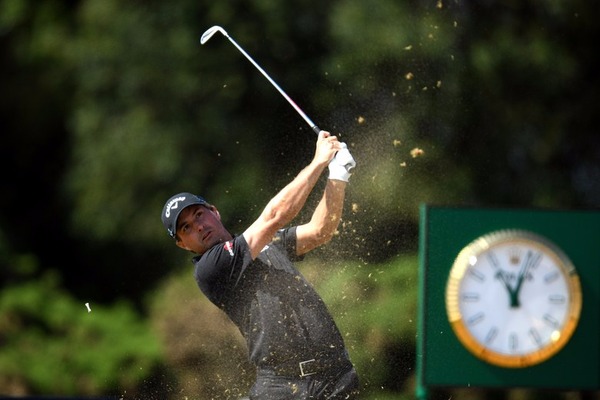 CARNOUSTIE, SCOTLAND - JULY 19: Kevin Kisner of the United States hits his tee shot on the 13th tee during round one of the 147th Open Championship at Carnoustie Golf Club on July 19, 2018 in Carnoustie, Scotland. (Photo by Matthew Lewis/R&A/R&A via Getty Images)

When Kevin Kisner posted his five-under 66 just after 12:30 p.m. local time in Scotland, it certainly didn't feel like he'd be leading the Open Championship at day's end. There were still 44 more groups to come in behind him, and with Carnoustie's greens looking as receptive as they'll be all week, chances were that someone would go lower.

But no one did on Thursday, and Kisner's round, which featured just 22 putts, held up, giving him a one-shot lead over Erik Van Rooyen, Zander Lombard and Tony Finau. It's Kisner's best round in the Open, and likely one of the best putting performances of his career given the circumstances. It also didn't come without some hard work.

"I putted so badly at the Greenbrier, and I just really worked hard at it," said Kisner, who wound up finishing in 55th in West Virginia two weeks ago. "I felt like my ball position got too far back at the Greenbrier. I was missing every putt to the right. So I came here Monday and worked really hard on my speed, which is always the hardest thing for us to get accustomed to here. I felt like the greens were not as slow as we've had in the past because the wind hadn't been up yet. The transition wasn't as big a deal. And the ball started coming off on the line, and when I'm doing that, I feel like I can hole them all."

Kisner didn't hole them all at first, but when the first big one dropped, it was for eagle at the par-5 sixth, sparking a run that included birdies at the eighth, 13th, 14th and 15th holes, plus huge par saves at 16, 17 and 18. It wasn't just his putting that powered him though, as the South Carolina native plodded his way around like an experienced links player, despite finishing T-54, 76th and missing the cut in his only three Open appearances.

"I think getting accustomed to links golf is something you have to do for where we come from," said Kisner. "It's taken me a few years to understand that. You've got to just be really good with your long putting and your long shots around the green, in my opinion. Getting the ball in the fairway and making fours or fives, whatever par is, when you're a little bit off."

Van Rooyen was another who benefited from the early morning conditions, as he was in the second group off the first tee Thursday morning. The 28-year-old South African briefly held the solo lead at five under at one point, but dropped his only shot of the day at the 18th to card a four-under 67. He's joined by fellow countryman Lombard and Finau, who continues to play well in this season's majors, having already finished T-10 at the Masters and solo fifth at the U.S. Open.

Another South African, 25-year-old Brandon Stone, posted a three-under 68, putting him in a tie for fifth with Ryan Moore and Brendan Steele.

Ten players make up a group at two-under par, including a quartet of major winners, Rory McIlroy, Justin Thomas, Zach Johnson and, somewhat surprisingly, Danny Willett. The 2016 Masters champion's struggles since his breakthrough have been well-documented, but he's shown signs of turning a corner of late, finishing T-6 at the Irish Open and T-19 at the Scottish Open. Spain's Jon Rahm is also among the group at two under.

Matt Kuchar, Rickie Fowler, Henrik Stenson and Webb Simpson each carded one-under 70s. Tiger Woods got off to a fast start, but faded towards the end, finishing with an even par 71 to remain in shouting distance of Kisner.

Jordan Spieth shot a one-over 72, while world No. 1 Dustin Johnson stumbled to a five-over 76.