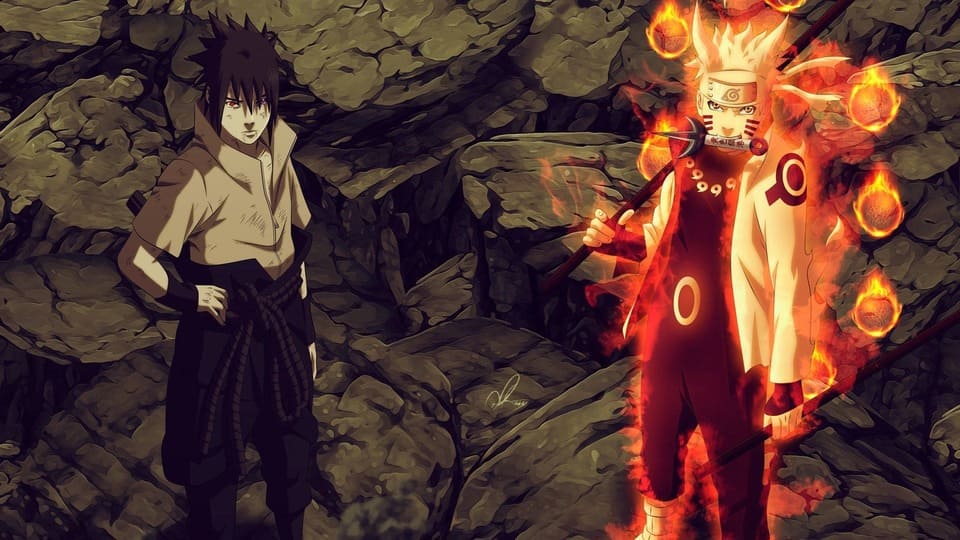 Most Memorable Quotes From Naruto And Naruto Shippuden

Naruto is a Japanese manga series written and illustrated by Masashi Kishimoto. It tells the story of Naruto Uzumaki, an adolescent ninja who searches for recognition from his peers and the village and also dreams of becoming the Hokage, the leader of his village. The series is filled with many inspirational and emotional quotes.

Here're some most memorable quotes from the series:

I’m not going to run away. I never go back on my word and that’s my ninja way.

When people are protecting something truly special to them they truly can become as strong as they can be.

If you don’t like your destiny, don’t accept it. Instead have the courage to change it the way you want it to be!

Hardwork is worthless for those that don’t believe in themselves.

When you give up, your dreams and everything else they’re gone.

It’s not the face that makes someone a monster, it’s the choice they make in their life.

Listen to yourself whining and complaining like some sorry little victim! You can whimper all day for all I care, you’re nothing but a coward!

If you don’t like the hand that fate’s dealt you with, fight for a new one!

While you’re alive, you need a reason for your existence. Being unable to find one is the same as being dead.

Once you question your own belief, it's over.

It's almost unbearable isn't it? The feeling of being all alone. I know that feeling. I've been there, in that dark and lonely place. but now there are others. Other people who mean a lot to me. I care more about them than I do myself. and I won't let ne1 hurt them. That's why I won't ever give up.... They saved me from myself, they rescued me from my lonliness. They were the first to accept me for who I am. They're my friends.

You think you’re the only ones who matter. You think you can put off death. But that peace made you foolish and thoughtless. If you kill someone, someone else will kill you… this hatred binds us together.

We're both just ordinary men who've been driven to seek vengeance in the name of justice, and if one comes to call vengeance "justice", such justice will only breed further vengeance… and trigger a vicious cycle of hatred.

A hero is not the one who never falls. He is the one that who gets up, again and again, never losing sights of his dreams.

A genius, huh? What does that mean? "Genius"? So I was not born with a whole lot of natural talent, not gifted like Neji ...but I work hard and I never give up! That is my gift, that is my ninja way!

If you believe in your dreams, I will prove to you, that you can achieve your dreams just by working hard.

In this world, wherever there is light-there are also shadows. As long as the concept of winners exists, there must also be losers. The selfish desire to protect peace causes wars, and hatred is born to protect love.

When a man learns to love, he must bear the risk of hatred.

This is true. Humans are horrible creatures. Our hearts are monsters. That's why our ribs are cages.

It is foolish to fear what we are yet to see and know.

If I had been open with you from the start… and looked you straight in the eyes and told you the truth, then I wouldn't have had to stand before you, from above, as a failure, telling you all of this. So this time, I want to impart this truth to you… You don't even have to forgive me. And no matter what you do from here on out, know this… I will love you always.

Those who can't acknowledge their real selves are bound to fail.

In the shinobi world it's not how you live, it's how you die. A shinobi's life is not measured by how how they live but rather, it is measured by what they accomplish before their death. And looking back now, my life has really been full of nothing but failure. Continually rejected by Tsunade, not being able to stop my friend and unable to protect neither my student nor my mentor. Compared to the great deeds of the Hokage, my actions are all insignificant things and deed. I wish I could have died like that of the Hokage. A tail is only good as it's final turn of events, a plot twist. And mistakes are an important part of a plot, too. I lived my life always believing that the lessons I learned are what haunt me. I swore I would accomplish a deed so great that it would obliterate all my failures. I'd die as a splendid shinobi, at least that's least as how it was supposed to go. But my tale ending like this... The Great Lord Elder prophesied that I would be the one who'd guide the revolution. A person who would make a great choice that will bring either peace or destruction to the world of the shinobi. I thought I would defeat Pain, stop the Akatsuki and save the world from destruction. And in the end, I failed that too. How pitiful! How sad that this will be the end twist of the tale of Jiraiya The Gallant. What a worthless story it turned out to be!

Regardless of our limitations, we can always be of some use. Our power may seem insignificant… but it may just prove to be useful in the grand scheme of things. Stay focused. Never avert your eyes, because if an opening arises, even our insignificant power may be enough to determine the fate of the world. Which is why everyone must stay alert and ready to strike at any moment!

What's the point of even setting the alarm if I wake up before it even rings. What a waste! And now I've gotta switch it off. But I feel too lazy and numb to stretch my hand till there and press the button and switch it off and all. But if I don't switch it off, it'll just keep ringing and ringing. I just feel tired of thinking all the work I have to do!

Just because you face adversity and hardships is no reason to give up in this world. A person, willing to throw away all his memories of his friends and comrades will never find peace of mind. If you persevere and endure, someone will be there to support you.

In the ninja world, those who break the rules are scum, that’s true, but those who abandon their friends are worse than scum.

In the name of gain and profit for one's nation and village, shinobi have hated and hurt each other for many years from the First to the Third Great Ninja War and the conflicts in between. All of that hatred cried out for power, thus I was born. In the past I was hatred, and power, and a Jinchuuriki. I hated this world and all its people and thought about destroying both. That's exactly what the Akatsuki is trying to do now. But then, a single shinobi from the Hidden Leaf village stopped me. He cried for me. I was his enemy yet still he cried for me. And he called me his friend even though we had battled. He saved me. We were on different sides, but we were both Jinchuuriki. Between those who've experienced the same pain, THERE CAN BE NO HATE! There no enemies here now, because each one of us bears the pain of having been hurt by the Akatsuki. The Sand, The Stone, The Mist and The Cloud, are no more. Now there is only.. SHINOBI! And if your still are unable to forgive The Sand, you can come back and face me after this war is over. The friend I spoke of who saved me is the target of our enemy. If he falls into their hands, our world's finished! I want to protect my friend and I want to protect this entire world! I am too young and inexperienced to do that. So I ask you, all of you, please lend me your strength for this fight! All those who feel as I do, FOLLOW ME!

Death comes with being a shinobi. There are times when death is hard to accept, but if you don’t get over it, there’s no future.

Just shut up for once! What the hell do you know about it?! It's not like you ever had a family in the first place! You were on your own right from the beginning, what makes you think you know anything about it?! Huh?! I'm suffering now because I had those ties, how on earth could you possibly understand, what it feels like to lose all that?!

In my eyes… you're a proud failure! When I look at you, I get an intense feeling in my heart… Because you're not perfect… Because you fail… you have the strength to get back up… Because I believe that is what true strength is…

This bridge is where our dreams are tied together. The place where we fight. Me, for my dreams. You, for your dreams.

Can you understand? Not having a dream… not being needed by anyone… The pain of merely being alive.

10 most realistic Anime cosplays you will ever see

Best anime movies of all time